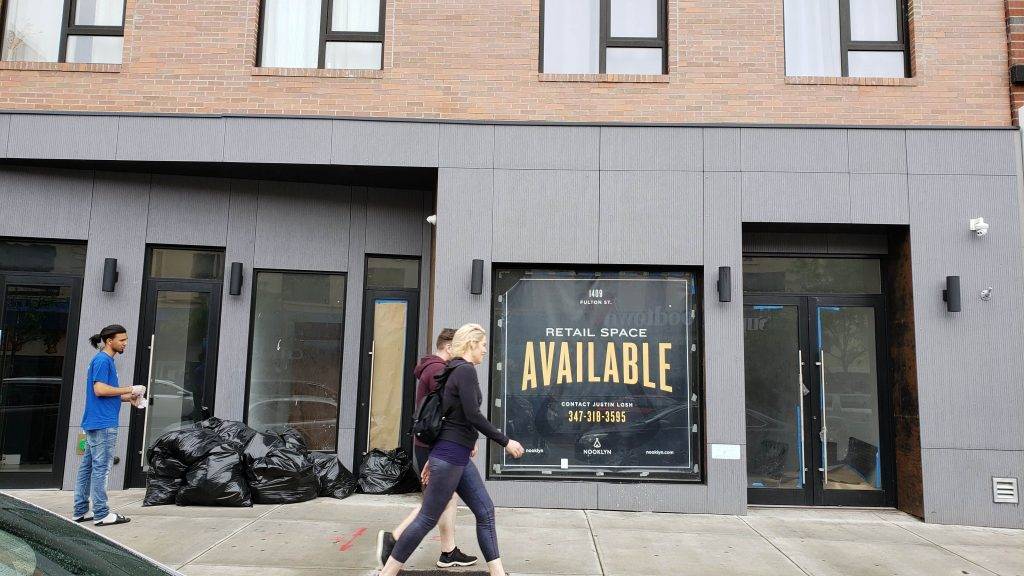 Medina Sadiq, the executive director of the Bedford-Stuyvesant Gateway Business Improvement District, recalled a day early this year when a ripple of excitement surged through the BID.

“One of my staffers ran into the office yelling about a bagel store,” she told Commercial Observer, referring to Bagel Story at 1237 Fulton Street between Bedford and Nostrand Avenues. “He was like, ‘Oh my god, the neighborhood is changing. We have bagels!’ ”

An all-hands-on-deck response to a bagel store might sound like an overreaction; it’s not as if Brooklyn—and even Bed-Stuy—hasn’t seen a bagel place. But a store selling bagels that are baked right before your eyes and freshly brewed coffee from Brooklyn’s Cocoa Grinder is a real sign that change is afoot.

Over the last few years, Bed-Stuy has felt ripe for the kind of retail resurgence that other areas of Brooklyn, like Williamsburg, have long experienced. However, it has taken much longer to acquire the signifiers of retail upgrade. There are still a lot of vacancies and still a lot of low-end retail. But, for those keeping score, Bed-Stuy keeps racking up interesting shops and restaurants: a dog grooming place, a vintage clothing store, independent coffee shops, vegan restaurants, and so on.

For a long time, Sadiq said, the area’s retail was about 40 percent beauty shops.

“Nail shops, beauty supplies, beauty parlors, barber shops, hair stores—that was a big amount of it, and there were a lot of discount stores, 99-cent stores, too. All that is changing now,” she said.

When retail broker Shlomi Bagdadi from Tri State Commercial Realty began doing business in Bed-Stuy in late 2015, he was unimpressed by the area’s retail landscape.

“They had your standard deli on the corner, a laundromat on the other corner, a closed-up liquor store, and that was basically it,” said Bagdadi, the company’s president. “There was no restaurant scene. If you wanted to grab something to eat or a cup of coffee, you bought the 50-cent cup of coffee from the corner deli. As far as food, you’d have to travel.”

Then, as now, the area’s shopping centered around Fulton Street, which is home to local shops and national chains including The Children’s Place, Planet Fitness, Papa John’s, GNC and Mattress Firm. But according to Andrew Clemens, the managing partner at Ripco Real Estate’s Brooklyn office, Fulton is not likely to be the driver for the new Bed-Stuy.

“While some of the national brands have taken space along Fulton Street because they see the foot traffic, a lot of local restaurants that are trying to keep a certain look and feel to their establishment don’t want to go to there,” Clemens said.

“The rents are higher on Fulton, and also, there hasn’t been enough turnover,” he added. “I saw the same thing in Bushwick on Knickerbocker Avenue. There’s too much of the check-cashing places and fast-food restaurants still there, and [new businesses are] afraid of being overlooked.”

Rather than be transformed by a single change agent, Bed-Stuy has seen individual entrepreneurs set up smaller shops throughout the neighborhood, often on quieter streets, giving the area more the appearance of a touch-up than a complete re-do.

“For Bed-Stuy, it goes block by block. There’s not necessarily one retailer or restaurant that shifted the entire neighborhood. On Malcolm X Blvd., the turning point was the high-end dog grooming shop, Dog Wash & Go,” said Avi Akiva, Tri State’s vice president who brokered that deal at 233 Malcolm X Boulevard at Hancock Street, which opened in 2016.

“They were one of the first businesses that took a chance and realized there’s upside here,” Akiva said.

Jay Chan and his wife, Kristin Chan, opened their 40-seat eatery Fancy Nancy at 1038 Bedford Avenue and Lafayette Avenue in August 2015 in a deal brokered by Clemens. The veteran chef and restaurant manager, respectively, had lived in the neighborhood for over five years by then, and were tired of having to venture outward to find worthwhile dining.

“We had a lot of other restaurant friends who were sick of going to other neighborhoods. We would always have to meet up in friends’ neighborhoods to go out to eat,” said Jay Chan. “So, we just banked that people who also lived here felt the same as we did, which is—we just want something around that’s close, and we don’t want to have to take the train.”

While Chan said the business is thriving, having developed a regular local clientele, Fancy Nancy has not exactly been part of a restaurant wave.

“There are more cafés, but still not a lot of restaurants,” he said. “There used to just be a Chinese place on the corner and a couple of taco places. Now there are more bars. The residents are moving in quicker than the businesses.”

Indeed, the local population is growing; just over the past 15 years, the number of people living in Bed-Stuy has grown by 25 percent, according to data from the New York State Comptroller’s office.

Tibetan restaurateur Amadeus Broger previously owned the now-shuttered Le Philosophe and Extra Place in Manhattan. When he founded his 40-seat eatery L’Antagoniste at 238 Malcolm X Blvd. off Hancock Street three-and-a-half years ago, he did so because, like Chan, he wanted to a place close to home, as he lives a block and a half away. He found the experience tougher than most.

“In the beginning, there were animosities,” he said. “People would throw stones at my window—people who live here—and I would get racial slurs [yelled at me].”

In time, Broger volunteered his venue for block association meetings, where he would offer free appetizers and booze, and sponsored a local soccer team. Business picked up—and then did so even more when he received a positive review from the New Yorker last year. Now, he’s scouting locations for a second restaurant in the neighborhood that he hopes to have open mid to late next year.

But overall, Broger thinks Bed-Stuy retail may have even less buzz now than it had when he opened.

“I see a lot of empty locations, and I’m surprised it takes a long time for them to get leased,” he said. “At the moment, it’s not as hot as it was maybe three years ago. You need enough cash flow for breathing room for two years. I think a lot of people don’t want to risk it. Now’s the best time, because the rents are still affordable.”

Leila Noelliste, who creates and sells beauty products out of BGLH Marketplace, which she opened in September 2017 at 358 Kosciuszko Street at Marcus Garvey Blvd., considered Flatbush Avenue first. While notably cheaper—she would have paid around $1,100 a month there, compared with the roughly $2,300 per month she pays now for a comparable space—both personal and business considerations led her to her current location.

In addition to being closer to her home in the neighborhood, she thought a Bed-Stuy location would bring her in touch with her desired millennial demographic.

“A friend told me that Bed-Stuy would be more trendsetting—that people in Flatbush might enjoy my business, but not really spread the word. Bed-Stuy is different,” she said. “Stuff that takes off here tends to have stronger word of mouth, because it’s more trend-focused.”

While she considers her current location a success, this is due in part to doing much of her actual selling online. Bed-Stuy foot traffic, she said, has been disappointing.

“When I moved here, my business was 100 percent online and nothing in-store,” she said. “Over the last calendar year, it started to creep up to around 20 percent in-store, and this year it’s 25 to 30 percent in-store. Our online numbers have stayed stable, so the business is picking up. But because most of my business was online, and with online revenue alone I could afford the space, I didn’t have as much pressure to get people through the door.”

Like the others, she is less than enthusiastic about the retail scene around her.

“I notice a good amount of vacancies,” she said. “Even now, there’s a retail vacancy across the street from me that’s been there the whole year I’ve been here.”

If there’s anything giving people optimism about Bed-Stuy retail, it’s the influx of residents, a new population for the area that will need new retail outlets sooner than later.

“The potential for Bed-Stuy is really high,” Bagdadi said. “There are a lot of commercial spaces still sitting vacant, unfortunately. But there are a lot of developments on Bedford Avenue taking shape and almost complete, and then you have a few new developments on Fulton Street that were just completed, and they’re going to be filled with residents. That’s going to attract new businesses to come to Fulton Street, off Bedford Avenue, to fill those spaces.”

Both Sadiq and Clemens pointed to the development at 1134 Fulton Street at the corner of Franklin Avenue. As of earlier this year, the development was shaping up to house 116 apartments and over 18,000 square feet of commercial space, though those numbers may increase by the time of the project’s completion. Other developments new or on the way include 1875 Atlantic Avenue, a nine-story, 118-unit luxury rental building that began leasing in January, and the seven-building Cascade condo complex, a 400,000-square-foot project that, by the time of its 2020 completion, will include 234 units and 41,000 square feet of retail.

While the area’s retail changes are taking longer than many hoped and seem to be dragging behind the residential influx, that same influx gives some hope that Bed-Stuy can become a retail and dining hot spot in due time.

“All this new housing signifies a lot of changes here, and it’s all luxury housing,” Sadiq said. “Before, a building would have five or six apartments. Now that same space has 20 apartments. We have apartment buildings as high as 14 stories now. That changes the look of the area. Give it three to five years. You won’t recognize Bed-Stuy.”