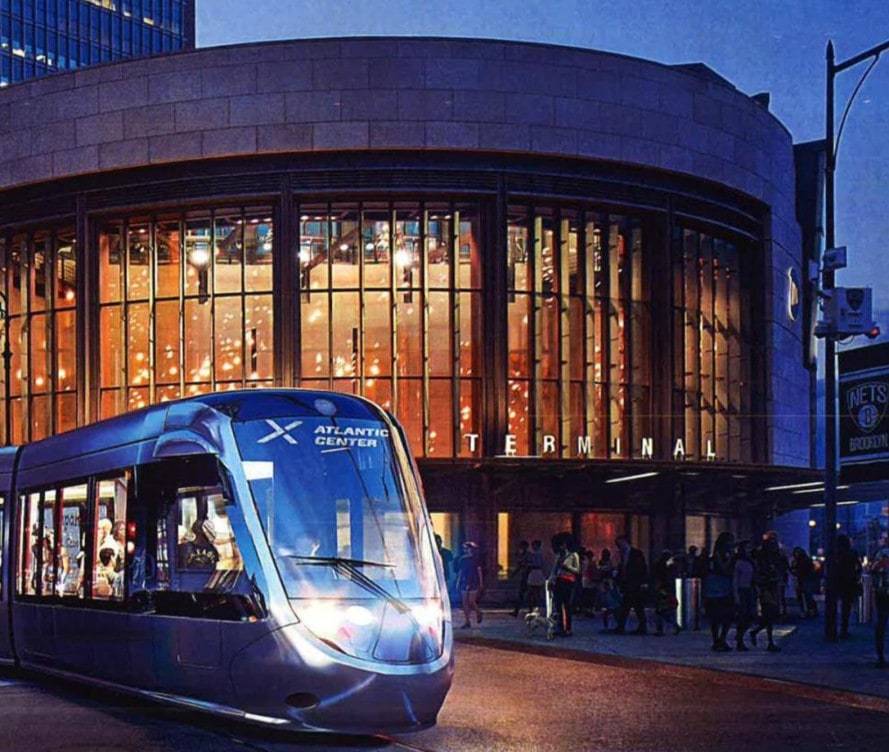 NEW YORK CITY — As officials prepare to kick off neighborhood meetings about the proposed Brooklyn-Queens streetcar system, a recent city study offers the best glimpse yet into what the $2.5 billion waterfront transit network might look like.

Last week, Politico first published the city’s multi-agency review of an earlier, still-secret study from the Friends of the BQX, a nonprofit that had originally proposed a streetcar system that would run 24 hours a day.

While details mentioned in the report are far from definitive, the city’s review finds that “a streetcar/Light Rail hybrid is the most appropriate transit intervention along this corridor.”

Here’s what we’ve learned about the streetcar system from that report.

The review determined that streetcars, and not light rail vehicles, would likely work better in New York City.

Streetcars — with a maximum operation speed of 30 miles per hour — will be better suited for mixed traffic scenarios and the dimensions allow them to negotiate tighter curves than light rails, “which may make this type of car more attractive for in-street running,” the study said.

Modern streetcars are generally 66 feet to 82 feet in length, and seven to a little more than eight feet in width, according to the report. Most streetcar systems in the United States, such as in Seattle and Washington D.C., have cars that are 66 feet in length.

The Friends of BQX’s study suggests that streetcars used for New York would be approximately 80 feet long with a capacity for 150 passengers and bicycles. Riders would be able to track arrival and location information using real-time geo-locating features and they would also have access to on-board Wi-Fi.

The projected service frequency for the streetcars is every five minutes at peak hours, and as long as 20 minutes between midnight and 5 a.m. on weekdays.

► Where are the stations going to be built?

The city has not yet unveiled its exact route for the streetcar system.

The Friends of the BQX’s study has a detailed map, though the city has not committed to the route. The nonprofit’s plan includes about 30 stops placed roughly at half-mile intervals.

It calls for a route that connects eight ferry landings, 37 bus routes, 17 subway lines and 116 Citibike stations — an idea that de Blasio has touted in previous announcements.

The proposed corridor overlaps with sections of the Q69 and Q100 bus routes in Queens and the B62 and B61 bus routes in Brooklyn, according to the city’s review.

Assuming that passengers will pay their fare before boarding the streetcar, the end-to-end travel time is estimated at 81 minutes for northbound service and 82 minutes for southbound service during weekday peak periods (7 a.m. to 10 a.m. and 3 p.m. to 6 p.m.)

It’s likely that a portion of the BQX route will share the road with cars, according to the report, and “considerable lane reductions will be necessary on many streets.”

► Why doesn’t the city just follow the nonprofit’s proposed route?

The city found that several locations along the Friends of the BQX’s proposed corridor have “geometric challenges,” such as problems that could arise at narrow turns and corners. One solution the city recommends is to change the route to minimize turns.

The city’s report also notes two “high crash” locations along the route proposed by the Friends of the BQX, though the potentially dangerous sites are not identified.

The map from the Friends of the BQX also shows a leg of the route that extends to the Atlantic Terminal, but the city axed that addition for now because it duplicates existing transit options, the report said.

► What could go wrong?

The report hints that on-street parking “may be reduced at points” along the route, though does not provide any further details. As DNAinfo reported earlier this year, the streetcar line could eliminate hundreds of parking spots.

Some stations and potential storage yards may need to be be constructed within the 100-year flood zone as designated by the Federal Emergency Management Agency, such as Hunters Point, Newtown Creek, Red Hook and Williamsburg. “Avoidance and flood protection measures should be considered in these areas,” the review said.

• Construction trouble with utilities and bridges

During track construction, it’s likely the route will intersect with water and sewer utilities as well as gas and electric lines, the report said.

The review found that 10 percent of the Friends of the BQX’s proposed route alignment will come up against “major conflicts” with water and sewer utilities.

“This means that accommodating both the required track and utility clearances would be difficult, costly, or infeasible and would require alignment adjustment,” according to the review.

The report mentions two bridges, both of which run over Superfund sites, that would require “substantial modifications” if the streetcar were to pass over them — the Hamilton Avenue Bridge over the Gowanus Cancal and the Pulaski Bridge over Newtown Creek.

It’s also possible that the truck traffic may be diverted away from the final route, which also could block loading and unloading zones.

► How much is it going to cost to build and run?

The Friends of the BQX estimated that a 17-mile system, which would include a Downtown Brooklyn shuttle, would cost $1.7 billion.

The city came back with an estimate of $2.5 billion for a 16-mile system without the shuttle, and a $31.5 million annual operations and maintenance budget.

Sixty modern streetcar vehicles would be needed for the system, and the Friend’s of the BQX study estimates that the cost of each vehicle would be roughly $5 million, though that number may double if each vehicle is customized.

Riders would pay the same price as the MTA’s single-ride fare, currently $2.75, though it’s unclear whether the city will be able to politically and financially negotiate a free-transfer integration with city’s subways, buses and future ferry system.

► How will they pay for this?

The city has previously said the system would be financed with money raised through the creation of a nonprofit that can issue tax-exempt bonds.

The review concludes that the potential to “‘self-finance’ through value capture” is “reasonable.”

The Friends of the BQX plan uses a “property tax model” that’s based on increased property taxes to existing and yet-to-be developed properties within a half-mile radius around the stations. It also assumes that New York City’s demand for residential and commercial property will continue a linear average growth based on historically high rates between 2004 and 2015.

The city forecasts the new transit project will generate a minimum of $2.4 billion to $3 billion in incremental property tax revenue. It notes that the launch of the East River Ferry Service resulted in a 7 percent increase in commercial and residential development within walking distance of those docks.

Link to the article: https://www.dnainfo.com/new-york/20160429/red-hook/heres-what-we-know-about-brooklyn-queens-streetcar-plan

PrevPreviousNew Offices Next to Woodhull Hospital!
Next2,500-11,700 SF Office Building in WilliamsburgNext
Back to top