Down but not out 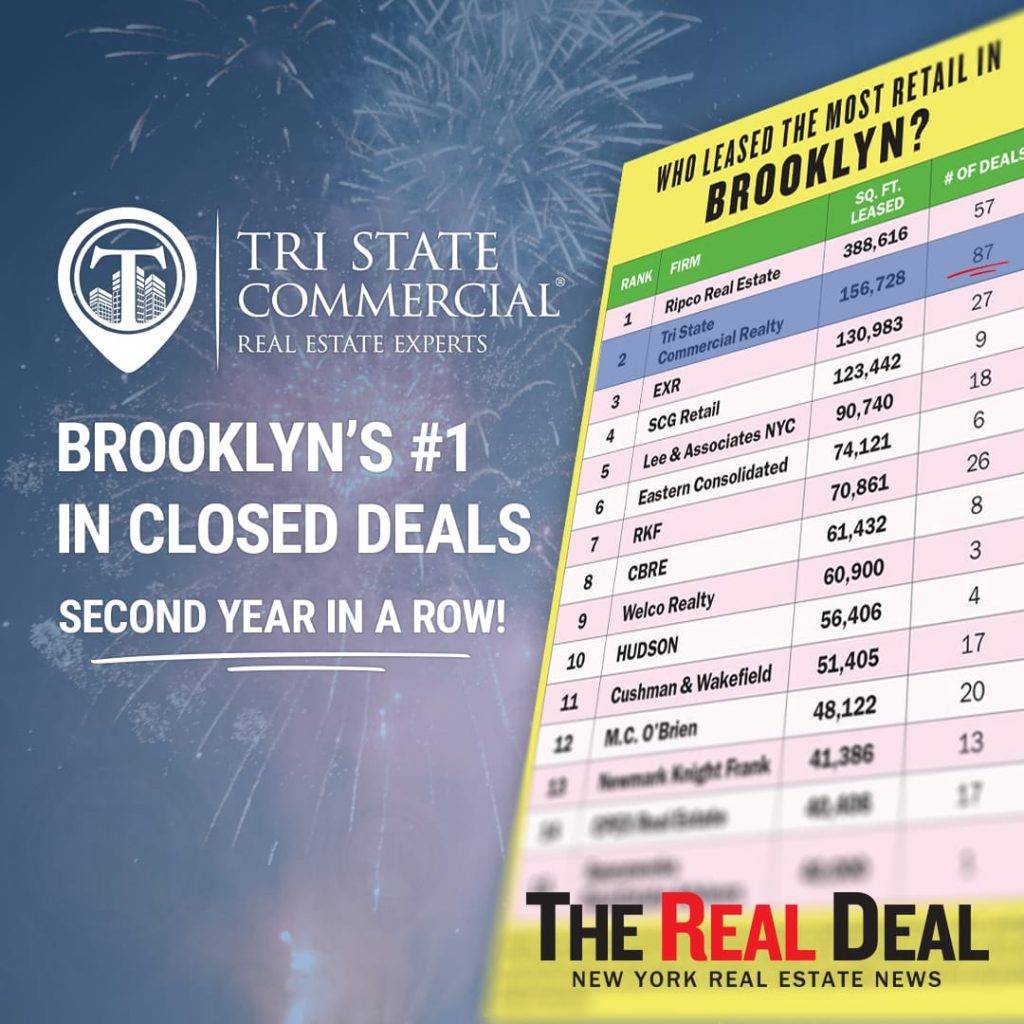 Down but not out

Tri State Commercial Realty consecutively held onto the number one spot for the total number of retail lease deals made in 2018 with a total number of 156,728 square feet leased and 87 transactions.

When the discount store Five Below opened a flagship location on Fifth Avenue last month, it caused something of a stir in the Manhattan retail world.

The brand, which sells all of its goods for $5 or less, does not exactly fit in with luxury retailers like Gucci and Prada that have given the strip its high-end reputation. But times, they are a-changing.

“It would have been harder years ago for a discounter to get space on Fifth Avenue or to get in new condo buildings,” said Andrew Goldberg, a retail vice chairman at CBRE. “Landlords might have been a little tougher in their negotiations to put in some of these people.”

It should be noted that the store is located below 49th Street on the lower-end stretch of Fifth, but the 10,800-square-foot deal at General Growth Properties’ 530 Fifth was just one of many involving bargain brands that drove a good chunk of retail leasing activity in 2018. Restaurants, gyms, health clinics and other service- and experience-focused retailers were also among the most active players snapping up space.

Four years into the correction of a flailing retail market — hit hard by both the rise of Amazon (and online shopping in general) and by investors who overpaid for retail space — the sector is no longer in crisis mode. But it is not on totally solid ground, either.

This month, with that landscape in mind, The Real Deal ranked the city’s largest retail brokerages in Manhattan and Brooklyn by the amount of square feet they leased between Oct. 1, 2017, and Sept. 30, 2018, and by the number of deals they did.

The data paints a mixed picture. RKF and Cushman & Wakefield landed the first and second spots on the ranking, respectively. But both firms saw the square footage of their deals drop substantially, even as the number of deals each brokered jumped.

“Yes, the aggregate square footage of our deals decreased because tenants are focused on leasing smaller spaces,” said Robert Futterman, CEO of RKF, explaining the drop. “In many cases they are right-sizing. …Retailers are finding ways to do the same volume in a smaller format.”

Retail players and market observers say the focus on smaller deals in 2018 has helped to keep the market chugging along.

“It’s not all doom and gloom, and looking at the labor statistics, there’s been kind of surprising strength,” said Jonathan Bowles, executive director of the Center for an Urban Future, a nonprofit that tracks retail, among other sectors. “I think that’s because in a couple of the big subsectors — namely food and health — you’re seeing more stores opening. You’re seeing real strength, and that is compensating for some continued losses that are happening in a lot of those merchandise retailers.”

Last year, when RKF landed the top spot on TRD’s Manhattan ranking, it did so by breaking the 1 million-square-foot marker. Not so this year. The remaining firms in the top five were Newmark Knight Frank, which  brokered 451,841 square feet in deals; CBRE, with 450,928 square feet; and Winick Realty Group, with 443,717 square feet. CBRE and Winick both upped their square-footage totals by roughly 21 percent, while Newmark saw its total increase by about 6 percent.

It should be noted that because the retail market is so opaque and public reporting is nonexistent, TRD relies on firms to submit deals as well as on news reports. And not all firms participated. JLL, for example, did not provide TRD its deals and was therefore likely undercounted. In addition, Eastern Consolidated, which ranked ninth on TRD’s list last year, shut its doors over the summer and no longer exists. Many of its brokers have now landed at other firms, including Brian Ezratty and Ron Solarz, who joined Newmark; Adelaide Polsinelli, who went to Compass; and James Famularo, who is now at Meridian Capital.

Last year at this time, TRD reported that landlords were just starting to drop their expectations. And brokers say that trend continued throughout the year — with the exception of owners who bought retail spaces at the height of the market and could not afford to drop rents.

Peter Braus of Lee & Associates, whose firm ranked ninth in Manhattan and fifth in Brooklyn, said there were not as many larger retailers hunting for space as there were a few years ago. But he said smaller tenants have become more active.

Many landlords, he said, spent years bundling together smaller retail parcels to create larger retail spaces but have since reversed course. They’ve started breaking those larger parcels into smaller ones.

He cited the Moinian Group’s Oskar development at 572 11th Avenue as an example, noting that the firm will likely end up with four or five tenants at its 24,000 square feet of retail space.

“A couple of years ago, this would almost certainly have been marketed to larger tenants with the intention of getting only one or two,” Braus said.

“For the most part, smaller is better and easier to lease for owners [in this market],” he added.

While RKF’s square footage was down, Futterman said it was able to do more deals than last year because while landlords are rarely going to “tip their hand and tell you what they’ll take,” they are getting realistic on rents.

“If the landlord is realistic, deals can be made. That’s really what we’re experiencing in real time,” he said. “We’ve got tenants that want to take space, and we’re finding more and more landlords that are coming to the reality of the market.”

Cushman’s Mike O’Neill, executive managing director of retail services, also said landlords are being more flexible with lease lengths. In the past, he said, 10- to 15-year leases were common, but owners are increasingly willing to accept five-year deals.

O’Neill said the retail recovery that took place between 2010 and 2015 sent rents skyrocketing. But, he said, rents got too high and have since been correcting. “Rents are down from their peak in late 2015,” he said. “In my opinion, it was necessary in order to start to drive leasing velocity again, and that kind of brings us to now.”

The data backs that up.

A fall 2018 retail report from the Real Estate Board of New York found that average ground-floor asking rents had dropped year over year in 15 of the 17 Manhattan corridors that it surveys twice a year. That was the largest number of corridors with rent drops since REBNY started releasing its Manhattan retail reports in 2000.

And some locations felt the pain more deeply than others.

The only two corridors that saw increases were 125th Street between Fifth and Morningside avenues in Harlem and Broadway between 72nd and 86th streets on the Upper West Side.

In Brooklyn, the top firms went on a tear, increasing their totals significantly. In REBNY’s most recent Brooklyn retail report, which looked at average asking rents for ground-floor retail along 16 corridors during the summer, it found that rents had decreased year over year on eight streets, increased on seven streets and remained flat on one street.

Tim King of CPEX Real Estate, which ranked No. 14 in Brooklyn, said the retail fundamentals in the borough are strong, and noted that options for retailers have increased significantly.

But he said landlords and clients are still having difficulty coming to terms on rents and have both become increasingly wary of pulling the trigger too soon.

“In general, the Brooklyn market is okay, but both owners and tenants are loath to make commitments,” King said. “The deal cycle is much longer than usual, and both sides are concerned about catching a falling knife.”

A ‘dollar’ for a deal

While traditional stores continue to struggle, brokers are doubling down on the areas where they’re seeing the most activity.

Ripco COO Mark Kaplan said the retailers that are doing well are adapting by changing the way they format and staff their stores and allocate resources.

Several brokers cited fitness centers, restaurants and health centers as businesses that are most immune to the threat posed by online shopping.

Between 2017’s fourth quarter and 2018’s third quarter, Manhattan eateries inked 218 leases across 660,313 square feet, according to data from CBRE.

Meanwhile, health clubs inked 22 leases across 146,606 square feet, and health-care facilities inked 15 leases across 68,757 square feet. “By and large, what fitness offers is experience and something that you can’t do the same way as if you were on your phone,” said Cushman’s O’Neill. “When you talk about experience, in a lot of ways, fitness and food fall into that.” Futterman cited the recently opened Trolls the Experience on West 57th Street, which was brokered by RKF’s Joshua Strauss and Grant Dunn, as a unique lease that combined experiential retail with intellectual property.

Another place where brick-and-mortar retailers are competing is in the bargain-hunting space; hence the Five Below deal on Fifth Avenue and the increase in activity among discount chains, including Dollar Tree, Family Dollar and Lot-Less Closeouts. (The Five Below deal was brokered by Erin Grace and Hilary Sievers of JLL, who declined to comment.)

As recently as 2008, those stores did not have any presence in New York. But according to a Center for an Urban Future report, they had 161 branches as of 2017.

Lee & Associates’ Braus pointed to a 21,000-square-foot deal his firm did in May with Target at 520 Second Avenue in Kips Bay, where the store will occupy most of an old supermarket. The space includes about 12,000 square feet of a former parking lot with about 10,000 square feet of existing ground-floor retail. Braus described that as an effective way to repurpose a parking lot, which had lost luster like many others.

While some of the city’s major corridors have started seeing rents fall, CPEX’s King noted that vacant spaces are increasingly getting filled on lower-profile side streets and in industrial areas.

The uses are becoming less traditional as well, he said. He recently met with a broker whose client wanted to set up a retail space where people could play badminton. Those types of unorthodox ideas, he said, are becoming more common.

“I [left] there scratching my head, like, this is clearly not a typical retail use. I can’t tell you how many oddball, doggy day care-type stores we’ve done in the last year,” he said, “and again, that might not be traditional retail, but it’s a sector, and it’s filling up space that is otherwise being underutilized.”

“To some extent, it’s a great time to be a tenant because there’s a pretty broad choice of opportunities,” he continued, “and because there’s been so much noise in the marketplace about how badly retail is doing, some tenants are able to make some fairly attractive transactions for themselves.”

PrevPreviousLandlords, Tenants Scramble for Market Reset After L Train Shutdown Reversal
NextIt’s a New Year. Get a New Job! Tri State Commercial Is Looking for AgentsNext
Back to top