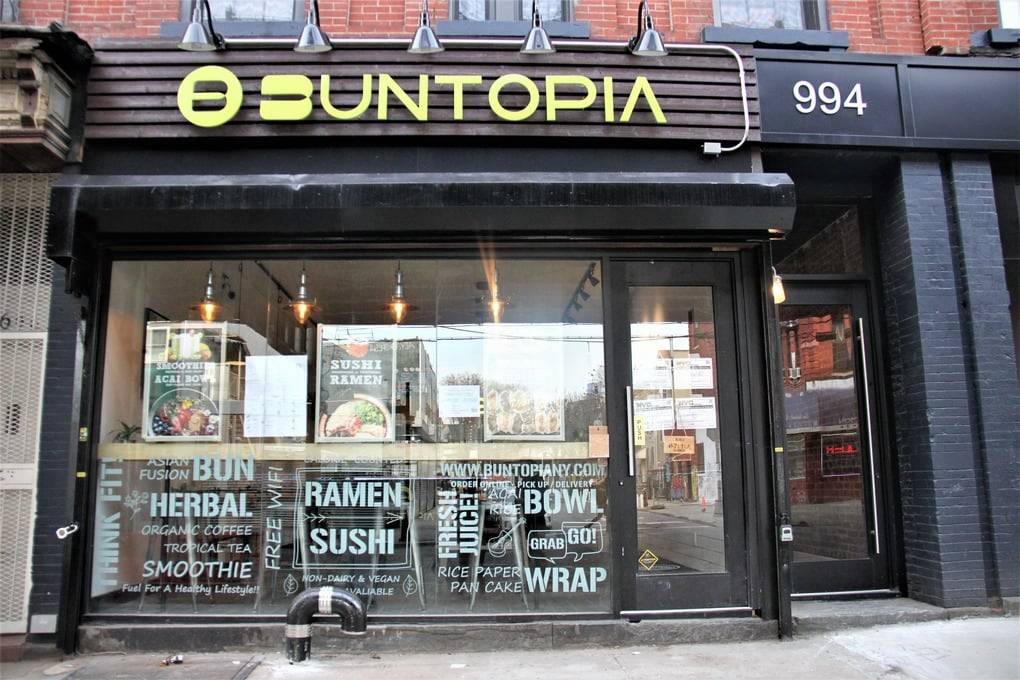 Buntopia expects to open towards the end of the month on January 21!

Add bun to utopia and you get Buntopia, a healthy Asian fusion cafe and eatery set to open January 21 on the border of Bushwick and Bed-Stuy.

For their first week of opening, Buntopia (994 Broadway Ave.- only a block from the Myrtle-Broadway subway station) will be honoring anybody who spends $15 with a $5 coupon for their next visit. And shortly before opening, limited coupons will be made available out front!

Co-owner Sean Chen, who hails from Fujian, China, moved to Queens five years ago after working in his family’s business in San Antonio, Texas at Sake Cafe Sushi Bar & Grill.

Also a bodybuilder, Chen suggests that Buntopia would be the perfect spot for you to grab something either before or after the gym.

The space, which has seating in the front and around the corner towards the back, is refreshing in appearance, boasting white walls that are beautifully juxtaposed with a faux grass lined countertop and as many plants as Buntopia can hold!

Offering table service as well, Chen looks forwards to the warmer months ahead, where he will be rolling out backyard seating.

Noting similarities with Manhattan’s plant based sushi chain Beyond Sushi, Chen explains to Bushwick Daily that Buntopia has differentiated itself by including other healthy food offerings such as acia bowls ($9), made to order cold press juices ($6-7), smoothies with energy booster options ($7-8), and their signature herbal espressos ($7).

“Everything in our spot is about herbal, low calorie, healthy things,” smiles Chen.

For instance, Buntopia does not use the standard sushi rice and instead calls for black and six grain rice, both imported from Japan. One of the vegan sushi rolls is called Flamenco ($7) and rolls together black rice with avocado, jicama, and sliced mango.

The menu, which was created by co-owner Jack Liu, brings together cuisine from China, Japan, and Thailand but puts it in a more modern health conscious context.

An option for Buntopia’s ramen selection allows you to get tofu shirataki spaghetti instead of traditional ramen noodles, a lower calorie choice, for only one more dollar!